species
1) Slotted ordinary screws
Mostly used for the connection of smaller parts. It has pan head screws, cylindrical head screws, hex flange concrete screw and countersunk head screws. The head strength of pan-head screws and cylinder-head screws is high, and they are connected to common parts; the head of the half countersunk head screw is arc-shaped, and its top is slightly exposed after installation, and it is beautiful and smooth. It is generally used for instruments or On precision machinery; countersunk screws are used where the nail heads are not allowed to be exposed.
2) Hexagon socket and hexagon socket screw
The head of this type of screw can be embedded in the component, can apply a larger torque, the connection strength is higher, and it can replace the hexagonal bolt. It is often used in joints with compact structure and smooth appearance.
3) Cross recessed ordinary screws
It has similar functions to ordinary slotted screws, and can be replaced with each other, but the cross-slotted ordinary screws have higher groove strength, are not easy to be bald and have a more beautiful appearance. When in use, a cross-shaped screwdriver must be used for loading and unloading.
4) Eye screw
The eyebolt is a kind of hardware accessory for load bearing during installation and transportation. When in use, the screw must be screwed to the position where the supporting surface fits tightly. No tools are allowed to be tightened, and no load perpendicular to the plane of the lifting ring is allowed to act on it.
5) Set screw
Set screws are used to fix the relative position of the machine parts. Screw the set screw into the screw hole of the part to be tightened, and press its end against the surface of another part, that is, fix the former part on the latter part.
Set screws are usually made of steel or stainless steel, and their end shapes are tapered, concave, flat, cylindrical, and stepped. The end of the tapered or concave end set screw directly tightens the part, and is generally used in the place where it is not often removed after installation; the flat end set screw has a smooth end, which does not damage the surface of the part after tightening, and is used for frequent adjustment of the position. At the joint, only small load can be transmitted; the cylindrical end tightening screw part is used to adjust the fixed position frequently, it can bear the larger load, but the anti-loose performance is poor, and the anti-loose measures should be taken when fixing; Set screws are suitable for fixing parts with larger wall thickness.
6) Self-tapping screws
When self-tapping screws are used on the connected parts, the connected parts need not be pre-made threads. When connecting, use screws to tap the threads directly. It is often used to join thin metal plates. There are two types of tapping screws with taper end and tapping screws with flat end.
7) Self-tapping locking screws
The self-tapping locking screw not only has the self-tapping effect, but also has low screwing torque and high locking performance. Its thread has a triangular cross-section, and the surface of the screw is hardened and has high hardness. Its thread specifications are M2～M12. 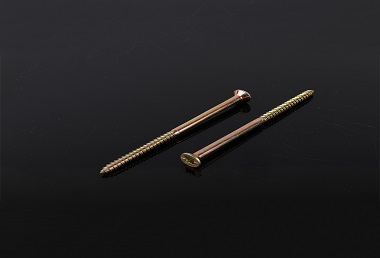 0
PREV: Standard specifications for screws?      NEXT: About the new standard for screws?